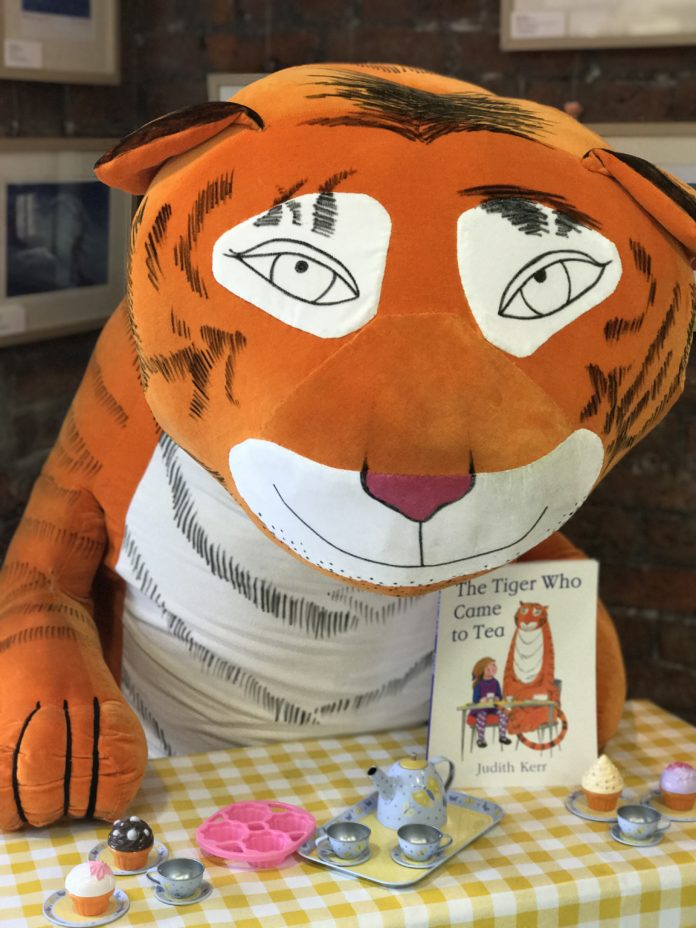 An exhibition showcasing the work of celebrated children’s author and illustrator Judith Kerr – who created the classic tale The Tiger Who Came to Tea – is going on display at Durham’s Gala Gallery.

Coinciding with the 50th anniversary of the much-loved classic, the exhibition will feature high quality facsimiles of Judith’s original illustrations and promises to bring the book to life for a new generation of family audiences.

The Tiger Who Came to Tea began as a bedtime story for Judith’s own children and was published in 1968. It soon became a classic and, by the time it celebrated its 40th anniversary in 2008, it had been translated into 11 languages and had sold over five million copies. Alongside facsimiles of original artwork, notes and sketches, the exhibition will offer the chance to step into Sophie’s kitchen to have tea with a life-size tiger.

It will also give visitors the chance to explore Judith’s childhood and her experiences of escaping Nazi Germany as well as her time as a refugee in Switzerland and France.

Judith settled in England in 1936, and wrote about her early life as part of three semi-autobiographical novels for older children in her Out of the Hitler Time trilogy.

Cllr Elizabeth Scott, Durham County Council’s Cabinet member for economy and partnerships, said: “This promises to be a fantastic exhibition of Judith Kerr’s work which I’m sure will interest people of all ages. Although Judith is best known for The Tiger Who Came to Tea, she produced many other celebrated books, with several drawing from her own life experiences.

“We hope that the exhibition will inspire youngsters to read more of Judith’s work and other children’s authors as we continue in our bid to be named UK City of Culture 2025.”

Gillian Rennie, head of exhibitions at Seven Stories, said: “Seven Stories is honoured to be the custodian of Judith Kerr’s archive and privileged to be curator of an exhibition that celebrates her remarkable life and her outstanding contribution to children’s literature.

“Visitors to Gala Gallery will be treated to a unique opportunity to see reproductions of Judith’s precious artwork, which shows how, through a lifetime of looking and drawing, her stories have become part of our nation’s childhood.”

Judith was born in Berlin in 1923. Her father, Alfred Kerr was a celebrated German-Jewish writer and theatre critic, well-known for his anti-Nazi views. As Hitler came to power the family were in increasing danger.

In 1933, following a tip-off that his passport was about to be seized, Judith’s father escaped, followed shortly afterwards by the rest of the family. They lived in Switzerland and France before moving to London in 1936, where they remained throughout the Second World War and where Judith lived until her death in 2019.

The gallery is open from 10am until 8.30pm each day and features a colouring and reading area for children. Books are also available to purchase from the box office.

For more information on the exhibition and other events at Gala Durham go to www.galadurham.co.uk/gala-gallery