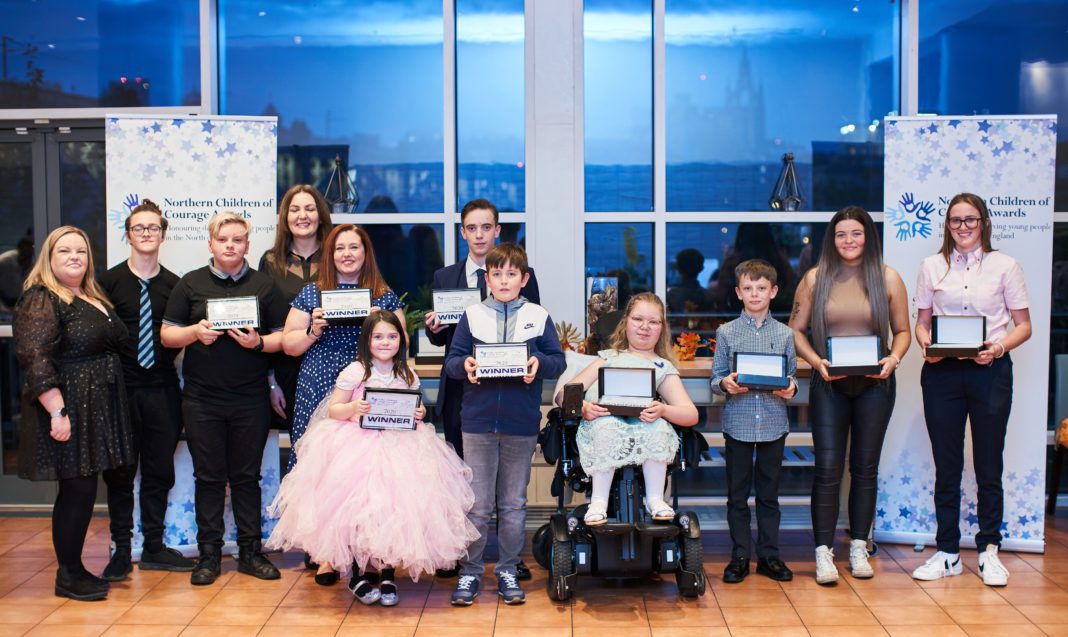 The big hearts and courage of North East children and young people who have overcome barriers, achieved something extraordinary or helped and supported others have been highlighted at an award celebration.

Last year’s Northern Children of Courage Awards were cancelled due to COVID, so the organisers decided to bring the winners together to present them with their much-deserved accolades.

Organised and supported for the third year by The St. James’s Place Charitable Foundation, the awards were split over two age categories (under 12 and 13-17 years old), and presented in six categories:  Outstanding Bravery, Fundraising Award, Special Recognition, Young Carer of the Year Award, Sporting Achievement and Care Team Award – to an adult team for care and support above and beyond expectations.

Nominated by Brain Tumour Support, Lyla had a brain tumour diagnosis at the age of three and has undergone many invasive operations since. Despite everything she has gone through, Lyla remains upbeat and with the help of her dad Paul and sister Lilley, she has created a Facebook page where she sends out certificates to other children facing their own personal battles. Her courage has inspired others and she is also a champion for Brian Tumour Support.

A Special Recognition Award went to 9-year-old Louis Rich from Throckley who has Batten Disease.

His two sisters also have the disease, and he has seen his sister Nicole becoming progressively worse before his eyes. Instead of playing with her, he now cares for her and reads stories to her. Despite the obstacles in his life, Louis excels at school and has received many accolades as well as being a member of the school council.

Winner of a fund-raising award is ten-year-old Callum Lane-Tingle from Billingham who has been raising funds for charity since his father was diagnosed with terminal kidney cancer.

Callum originally raised £5000 but has now greatly surpassed that helping Butterwick Hospice and Cancer Research UK to name just two. His ongoing drive has helped his father stay positive too.

Another fundraising winner is 14-year-old Tyler Ridley from Bedlington

Tyler has Osteogenesis Imperfecta, Benign Hypermobility Syndrome and ADHD. He has spent most of his life in hospital and is a part time wheel chair user. Any small knock can result in him breaking a bone but despite this he remains positive and fundraises extensively by doing the Junior Great North Run and even zip wiring from the Tyne Bridge.

The Care Team award was presented to founder Donna Swan of The Calmer Therapy Social Community Enterprise Group based in Morpeth.

This group of young people work together to support each other and carry out activities that help with their life or social skills. They also make products which are sold at local markets or online with the money invested back into the group or donated to help others. Everyone in the group has a difficulty in their lives but being together with support is a massive benefit to them all.

Nine-year-old Ellie Renton from Kirkby Malzeard, Ripon plays powerchair football with Middlesbrough Powerchair Football Club. She has Spinal Muscular Atrophy (SMA) Type 2 and has never been able to walk. She particularly enjoys playing powerchair football. She is the youngest player in the National League and enjoys the sport as she can mix with adults and children in a similar position to herself.

Erin Cockburn (13 ) looks after her mother who has physical and mental health issues, yet she is full of positivity and energy having gained a Black Belt in Karate and gained team places in both the boys and girls football teams for Wallsend.

Ten-year-old Sean Benyon looks after his brother and mum who suffer from several conditions. He is a member of many young carers groups and helps young people get to terms with their situation. He has also made a training video about the importance of being a young carer.

17-year-old Tanya Wilson looks after her mother who has MS. She has learned as much as she can about the condition and the needs of her mother. She has taken first aid courses so that she can help her mother and others in times of emergency.

Jake provides his poorly dad with a high level of physical and mental support and acts as his carer. He has also had his fair share of trauma too having been mugged and then contracting Meningitis. Despite his responsibilities at home Jake has a great sense of humour and has shown remarkable resilience.

Mark Beverley from the St. James’s Place Charitable Foundation was proud of each of the children who won an award.

“These young people are remarkable and are an inspiration to us all. We all have things going on in our lives but the courage these young people have shown is amazing and they all deserve the recognition they’ve received.”

The next awards will take place on Friday 6th May at Gateshead Hilton, please contact danny@changefr.co.uk for nomination forms.