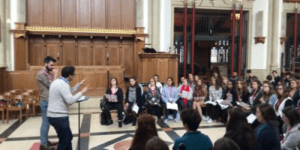 A week-long festival of choral music is due to be staged in Durham. The Durham Vocal Festival, which will begin on Saturday 28th January, is set to feature performances from composer and conductor Will Todd and from The King’s Singers, who have won two Grammy Awards.

It will be the first time that the festival, which also boasts an array of other acts, has been held.

The festival will include the first ever British performance of Defiant Requiem: Verdi at Terezin. Defiant Requiem is about a group of Jewish prisoners who were held at a concentration camp during World War II. The prisoners learned to sing Verdi’s Requiem Mass and then performed it numerous times as an act of defiance against the Nazis.

Defiant Requiem: Verdi at Terezin will be staged at Durham Cathedral on Saturday 28th January from 7.30 pm. The performance will feature the Durham Choral Society Orchestra and the Durham University Orchestral Society Choirs.

Durham’s Gala Theatre will be putting on a performance from the Northern Lights. The Northern Lights, a mixed acapella group composed of students from Durham University, will be performing on Tuesday 31st January.

The Gala Theatre will also host a masterclass from the Durham University Opera on Wednesday 1st February.

The King’s Singers – an award-winning sextet of male voices – will be performing at Durham Cathedral on Monday 30th January from 7.30 pm.

Looking for a last minute Christmas present? How about tickets to the king singers as part of Durham Vocal Festival https://t.co/FHaUyXSvAz

The Durham Vocal Festival will also see events featuring the National Youth Choirs of Great Britain Fellowship. These events will culminate in the North East Festival of Youth Choirs, which will be held on Saturday 4th February.

A number of workshops will be put on, which will give choirs, conductors and enthusiastic locals the chance to glean tips from some of the most famous names in choral music.

The highlight of such sessions will be the Come and Sing Day, with Will Todd. Held at Ushaw College from 2.00 pm to 5.00 pm on Sunday January 29th, this workshop will be followed by a mass performance featuring Mr Todd, which will start at 5.30 pm.

The 1st ever Durham Vocal Festival begins this month, showcasing the finest vocal music from the #NorthEast & beyond pic.twitter.com/MraxXIxdGO

Michael Summers, manager of music education with the Durham Music Service, said, “We couldn’t have hoped for better artists to launch the inaugural Durham Vocal Festival.”

“There will be something for everybody. Hopefully, the festival will encourage visitors to take their interest in music further, which the Durham Music Service can help with.”