Home Arts & Culture The Lambton Wyrm in Story and Song 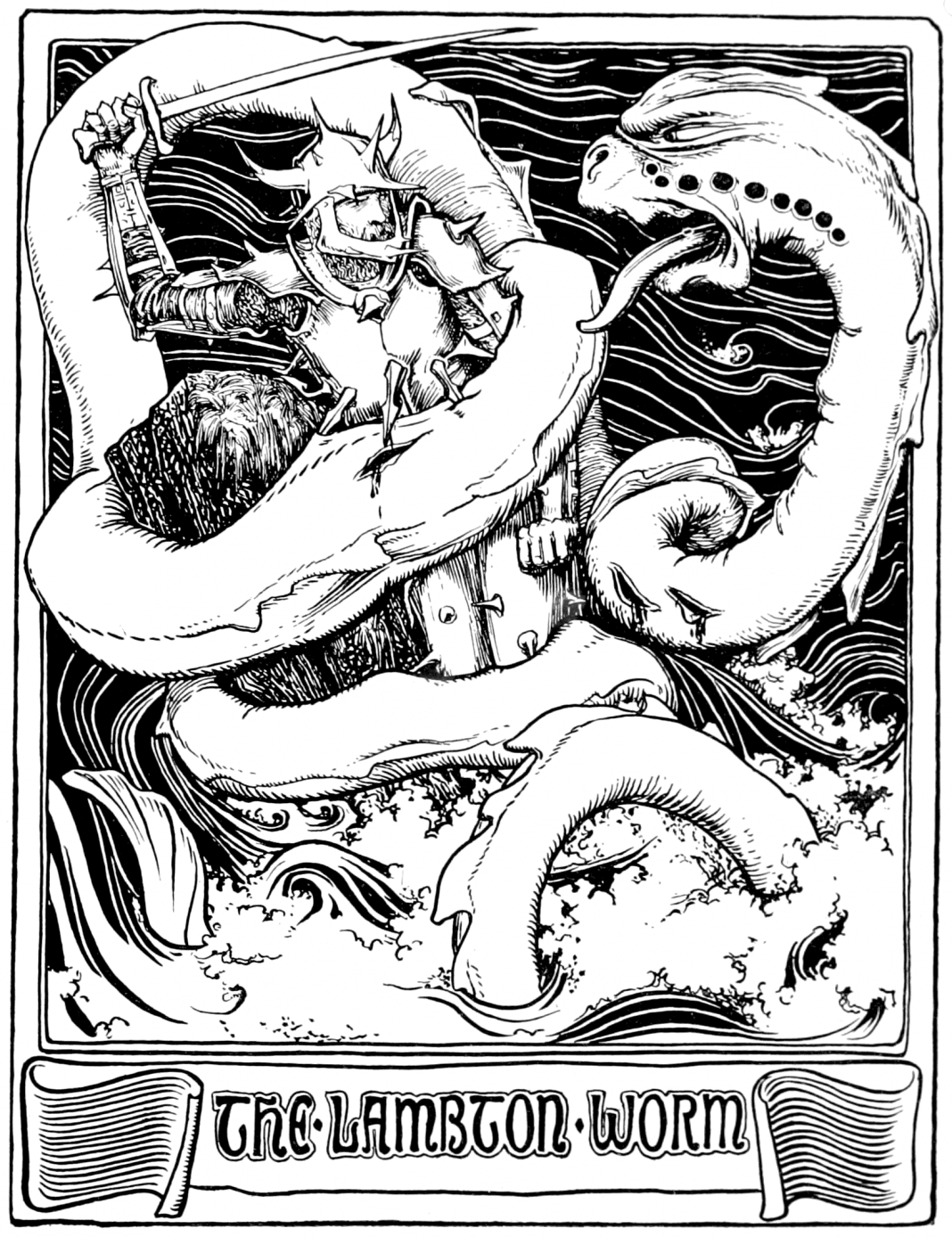 It’s been a while since we’ve told the tale of the Lambton Wyrm, and if stories aren’t told, they get restless and start causing mischief.

The Lambton Wyrm may not be as famous as Grendel or the Dragon in Beowulf, but the stories’ roots are as old as heathen Britain, and they have been retold and adapted through the centuries. Several of the elements in the Lambton Wyrm can be found in Norse sagas: the wyrm Níðhöggr lived wrapped around the roots of the tree of life, Yggdrasil, where the well Hvergelmir was. The recent remake of the Witcher on telly, with its “law of surprise”, has reminded people of the ancient concept of paying with something unknown to you at the time of the deal; in the full Lambton Wyrm version, the hero has to pay for killing the Wyrm by killing the first living thing he sees on returning home, like Jephthah in the bible.

You can read more about wyrms in European pagan lore here, and here is an article on the Lambton Worm from an academic historical perspective.

This is how you tell the story to children. The sieve-helmet is essential.

This a more laid back telling of the story, with a few tangents on history.

Robert Sepehr is a guerrilla anthropologist who tackles topics of linguistics, archaeology, and paleobiology that other researchers are too chicken to touch. This video ends with several different singers giving their rendition of the Lambton Worm Song.

The Lambton Worm Song, 1867 version, performed by Roly Veitch and his Blaydon Aces

Join in if you know the words! If you like this, you can find out more about Roly’s work here.

One Sunday morn young Lambton
Went a-fishin’ in the Wear;
He catched a fish upon his huek,
He thowt it aafuly queer,
But wharra kind a fish it was
Young Lambton couldn’t tell.
He waddn’t fash to carry it hyem,
So he hoyed it doon the well.
Whisht! lads, haad yor gobs…
Noo Lambton he’s inclined te gan
An’ fight in foreign wars
He joins a troop of Knights that cares
For neither wounds nor scars
So off he goes to Palestine
Where queer things him befell,
An he varry seun forget all aboot
That funny worm doon the well

Noo the worm he’d often gan an’ feed
On calves an’ lambs an’ sheep,
He’d swally little bairns alive
As they lay doon to sleep.
An’ when he’d eaten aal he cud
An’ he had has he’s fill,
Away he went an’ lapped his tail
Ten times roond Pensher Hill

Whei, the news of this most aaful worm
An’ his queer gannins on
Seun crossed the seas, an’ got t’ the lugs
Of bold and brave Sir John.
So back he comes from Palestine
And cuts ‘it in three halves,
An’ that puts paid to eatin’ all them bairns and sheeps and calves

Why noo ye knaa hoo aall the folks
On byeth sides of the Wear
Lost lots o’ sheep an’ lots o’ sleep
An’ lived in mortal feor.
So let’s hev one to brave Sir John
He kept the bairns from harm
Saved coos an’ calves by myekin’ haalves
O’ the famis Lambton Worm