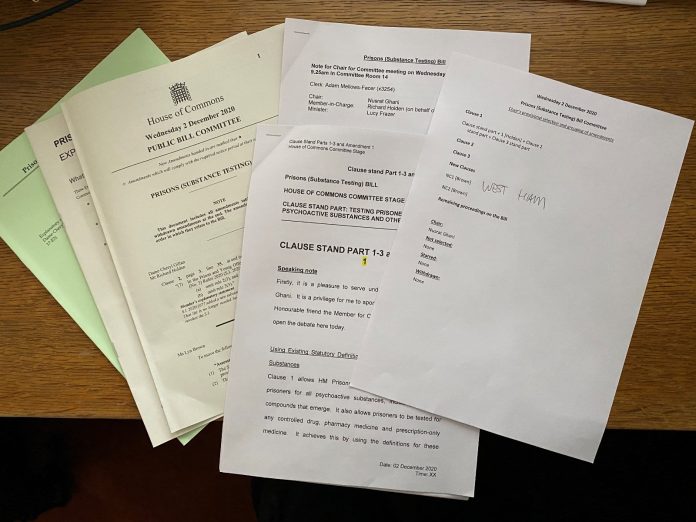 Richard Holden, Member of Parliament for North West Durham, has today taken Committee Stage for the Prisons (Substance Testing) Bill through the House Of Commons.

If passed, the Bill will mean that so-called “psychoactive substances” will be easier to crack down on illegal drug use in prisons. Without the provisions in this Bill, the prison service will be slow to react to new and emerging drug trends as these cannot be tested for under the current framework without making a new statutory instrument which can lead to delays of up to a year, meaning prisoners are vulnerable and putting prison officers at risk.

The Bill also future-proofs drug testing programs in prisons by adopting definitions of drugs that capture new psychoactive substances that may emerge onto the market, as well as preventing criminals from being able to evade detection by tweaking the chemical composition of existing drugs.

Having introduced the Bill in the House of Commons in October on behalf of Rt Hon Dame Cheryl Gillan MP, Richard was asked to lead the Committee Stage for the Bill, which involved proposing the membership, picking amendments to be moved, and leading the debate, which took place this morning. Richard worked closely alongside Prisons Minister Lucy Frazer MP, and MPs from the Conservative Party, the Labour Party, the Liberal Democrats and the Plaid Cymru Party all supported Richard and the bill through to the next stage in January.

“I am absolutely delighted that I have been able to work on this vital Committee Stage for this Bill. It’s a hugely important piece of legislation aimed at improving the lives of those in custody, providing support and prevention methods to some of the most vulnerable members of society.

“The Bill will make it easier to trace products and prevent them getting into prisons – this makes treatment easier, will reduce reoffending, as well as reduce attacks on guards and incidents of self-harm. This really came home to me after speaking to prison officers in North West Durham who work at local prisons. It’s a vital tool in the fight against drugs in prisons and for rehabilitation of offenders.

“The Bill has fantastic cross-party support and I want to thank everyone who sat on the Committee for their support.”