Durham County Council has announced it will be holding a public consultation over the excessive display of ‘to let’ boards by landlords in Durham City.

The consultation, which starts today, will ask the public and other interested parties whether such boards disfigure Durham’s historic streets and if stronger action is needed to improve the situation.

In 2009, Durham County Council introduced a voluntary code “to protect the character and appearance of the city from the display of excessive boards.”

As this code, however, has been continually breached over recent months, the council is now considering applying to the secretary of state for a Regulation 7 order. Such an order would remove the current rights of landlords and letting agents to display lettings boards without consent and give the council the power to decide which boards should be allowed. 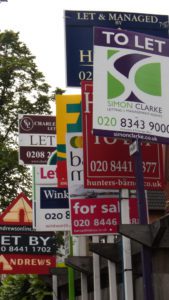 The consultation process will ask people whether they want the voluntary code to remain or if they would like the council to apply for the Regulation 7 order. The council could apply for an order that limits the number of boards and the amount of time for which they can be displayed. Alternatively, the order could ban the boards from Durham City completely unless express consent has been given.

Councillor Neil Foster, cabinet member for economic development, said, “While we understand and appreciate the need for landlords to market their properties, this has to be balanced against the impact lettings boards can have on our beautiful and historic city.”

“We also believe that ‘to let’ boards are a minor part of the modern marketing strategy and that most students will locate property via the internet.”

“The voluntary code we introduced initially proved to be successful. However, more recently we are aware that some agents are breaching the rules and residents have asked for us to look at ways to give the council power to act in these situations.”

“As well as the evidence compiled as part of the voluntary code, any application to government would have to be supported by local people and have the views of landlords and agents so it’s essential that everyone gets involved and has their say on which approach they’d like us to take.”

People can express their views by going to www.durham.gov.uk/consultation before Friday 17th February. People will be able to find out more about this issue at a drop-in event at Durham Town Hall, which will be held from 3.30 pm to 7.30 pm on Monday 16th January.