Two students from Durham University have paddled a kayak all the way from the Caribbean island of Grenada to Miami. Their 2000-mile journey took them just over three months.

Will McCreadie, 21, and George Parry, 22, survived on the meagre supplies they could transport in their canoe and the hospitality of local people. The duo were the first ever Britons to complete such a trek.

Named the Golden Arc Expedition, their journey – in their 22-foot sea kayak – involved paddling across open sea, around dangerous reefs and through shark-infested waters. The pair navigated the Windward and Leeward chains of islands, passing through the waters of 18 countries.

The pair generally paddled for 12 hours per day, but on some days they had to paddle for 24 hours. Their average speed was three knots per hour. 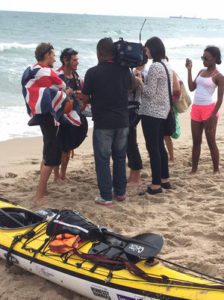 The students’ epic paddle took them through both the Caribbean Sea and Atlantic Ocean. After beginning their voyage in Grenada, they made for Puerto Rico then the island of Hispaniola before heading to the Turks and Caicos Islands.

They next paddled through the Bahamas before tackling the 80-mile stretch of open water – with its powerful gulfstream currents – between the Bahamas and Miami. In Miami, the exhausted students were enthusiastically welcomed by family and friends.

Mr McCreadie commented, “This has undoubtedly been the toughest endurance test we have ever faced.”

“The hardest part was battling headwinds and strong currents during the long overnight crossings, knowing that we had to overcome fatigue and remain 100% focused for every second of the trip.”

The Golden Arc Expedition raised funds for the Get Exploring Trust, a charity that enables youngsters to enjoy the great outdoors. The charity has so far raised over £20,000.

Mr Parry and Mr McCreadie, who are directors of the Get Exploring Trust, said, “We hope to use our experiences to inspire other people from whatever background, age or demographic to get into the great outdoors, challenge themselves in different environments and develop their characters.”

“Most importantly, we want to inspire people to enjoy the environments we have come to love and have gained so much from exploring.”