Unless you’ve been enjoying a long vacation in the solar system’s outer reaches, you should know that a general election will take place on 8th June.

But do you know what your voting options will be? You’re probably aware that Durham City’s current MP is Labour’s Dr Roberta Blackman-Woods. But what about her Tory challenger? And who are the Lib Dems and UKIP putting forward?

Are the Greens or any independents getting involved and who on earth are the Young People’s Party? More importantly, does anyone have a chance of unseating Dr Blackman-Woods?

Read on to see who you can cast your ballot for and who might be representing you down in London come June 9th.

Dr Blackman-Woods has been Durham City’s MP since 2005. Before entering Parliament, she worked as an academic, lecturing in social sciences at Newcastle University, the University of Northumberland, and at Ruskin College, Oxford, where she was also a dean.

Dr Blackman-Woods has served as a local councillor in Newcastle and Oxford, and worked as a welfare rights officer for Newcastle City Council.

In Parliament, she has served as the shadow minister for local government, communities and housing.

Dr Blackman Woods has regularly spoken up for the north east on issues such as cuts to school funding, people needing to use foodbanks, the economic impacts of Brexit and housing issues.

She resigned from Labour’s front bench team in June 2016, saying she had lost confidence in leader Jeremy Corbyn, but re-joined after Corbyn was re-elected.

In the 2015 election, Dr Blackman Woods won Durham City with a majority of 11,439 votes, significantly up from the 3,067 majority she gained in 2010, when she lost votes to the Liberal Democrats due to Labour’s position on tuition fees.

Dr Roberta Blackman-Woods is married and has one daughter. She is a cricket fan and keen gardener, and has completed the Great North Run.

Like his Labour opponent, the Conservative candidate for Durham City has an academic background. Richard Lawrie has lived in Durham since 1999 and he works as a senior tutor at Durham University.

Mr Lawie has said that, if elected, he would scrutinise the proposals for the expansion of Durham University, develop Durham’s tourist sector, and work to boost the economy of the city and its surrounding region. He would campaign to bring the Leamside Line back into use.

Richard Lawrie said, “A vote for me is the only way to challenge the decades-long mismanagement of Durham.”

Mr Lawrie’s twitter profile states that he believes in “free people, low taxes, small states, free markets” and that he voted Leave in the Brexit Referendum.

The Tories came second in the 2015 election, after trailing in behind Labour and the Liberal Democrats in 2010 and 2005. Overturning Dr Blackman-Woods’ majority is likely to be a tough task, but – as elsewhere in the country – Durham’s Conservatives may benefit from a collapsing UKIP vote.

Amanda Hopgood serves on Durham County Council, representing Framwellgate and Newton Hall. She has served as the leader of the council’s official opposition.

Though the Liberal Democrats have little chance of defeating Labour, they did gain five seats in the recent local elections while Labour lost 20. In the 2005 and 2010 general elections, the Lib Dems came in second, trailing Labour by 3,067 and 3,274 votes respectively, but in 2015 they were beaten into third place by the Conservatives.

With a victory for the Leave campaign in the EU referendum, it’s perhaps surprising that UKIP’s moment has not arrived. Internal party divisions, however, and Theresa May encroaching on UKIP’s territory with her tough Brexit stance have decimated the party’s appeal.

Despite County Durham voting overwhelmingly to leave the EU, UKIP won no seats and got only 2% of the vote in the recent Durham County Council elections.

Jonathon Elmer has lived in Durham since 1997. He worked for Durham County Council in a number of roles, including that of sustainable development manager, before leaving the council five years ago.

Mr Elmer now campaigns to increase the participation of local people in decision-making processes and works as a freelance ecologist.

He is married to Priscilla and they “have two children aged 11 and 13, who attend Durham’s excellent schools.”

Mr Elmer said, “Five years ago, I left Durham County Council due to its abandonment of the idea that society, the economy and the environment should be considered as equal and interdependent.”

“This is most blatantly evident in the council’s emerging ‘County Durham Plan’.”

“I am standing for election in order to draw attention to Labour’s regressive plans for the city and advocate an alternative and positive future.”

In the 2015 general election, the Green Party received a respectable 5.9% of Durham City’s vote.

The Young People’s Party believes in taxing land rather than income and feels a universal citizen’s income should replace the current range of means-tested benefits. The party advocates a greater respect for civil liberties and the legalisation and taxing of drugs. The YPP feels more should be done to tackle the housing crisis.

The party supported neither Leave nor Remain in the EU Referendum and is against most British intervention in foreign wars.

Jon Collins is one of only three YPP candidates standing in the 2017 general election.

Durham Magazine was, however, unable to uncover any information on Mr Clark or his policies.

Does anyone have a chance of beating Labour in Durham City?

The short answer to this question is ‘almost certainly no’. Though some north-east Labour seats may change colour due to a Tory surge, Durham City doesn’t seem to be among them.

The most recent polls are indicating that Labour’s core vote will hold up. What is likely to happen, however, is that UKIP supporters (including former Labour voters) will switch to the Tories.

The dalliance of these voters with UKIP seems to have acted as a ‘gateway drug’ to get them to vote Conservative for the first time, particularly as UKIP are in disarray and May is giving the impression she will deliver a hard Brexit

In some seats, this will probably have the effect of adding the former UKIP vote to the core Conservative vote, thereby gifting the Tory candidate a larger vote share than the sitting Labour MP.

But if we look at the last election results for Durham City, we can see this is unlikely to happen here.

In 2015, Labour gained 47.3% of the vote, the Conservatives got 22.2% and UKIP received 11.4%. So even if we combine the Conservative and UKIP votes, that figure still falls far short of what the Tories would need.

There are also the recent County Council elections to consider, which Labour – despite losing seats – still won with a comfortable majority. It is also worth remembering that in this election Labour lost votes to independents rather than Tories.

Though the Liberal Democrats came second in the 2005 and 2010 general elections, they are unlikely to mount much of a challenge to Dr Blackman-Woods in 2017. They are not polling well and they did not perform well in the recent local elections.

Of course, polls are often wrong these days and politics is an increasingly unpredictable game. But I would expect the people of Durham City to wake up on June 9th to find they still have the same MP. 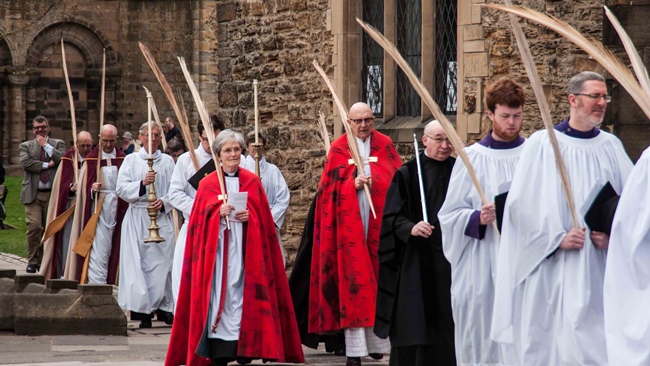 Peas, figs, thunder, donkeys – what do you know about Palm Sunday?

Get Tips from the Very Best Musicians at Durham Brass Festival