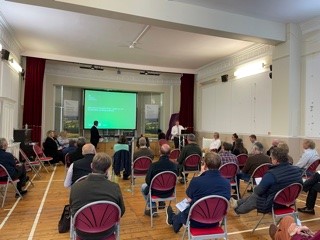 On Friday Richard Holden MP brought Paul Caldwell, CEO of the Rural Payments Agency (RPA), and other RPA and DEFRA officials to Weardale, to meet with local farmers to explain themselves directly and answer questions on the future of farming.

With the great opportunity leaving the EU and the byzantine Common Agricultural Policy affords, the RPA is now responsible for the farming and environmental payments transition through their Future Farming and Countryside Program.

Richard had invited to Rural Payments Agency and DEFRA who are designing the new Environmental Land Management Scheme (ELMS) which will be based on the positive environmental impact that farmers make – that is taking over from the traditional schemes that are based on money for land ownership with more limited environmental schemes.

The start of the new ELMS scheme begins this year and local farmers have raised concerns with Richard about the details.  Richard therefore pushed the RPA and DEFRA to meet local Weardale farmers and was delighted that the first public meeting held by the RPA in almost two years took place in St Thomas’s Church Hall, Stanhope, North West Durham on Friday 27th August with thirty local farmers in attendance with a briefing from the RPA Chief Executive, senior team leaders, and from DEFRA officials before an hour of Question and Answers.

“Farming is not a business with fast turnarounds. It works in seasons, decades and generations. The one thing that farmers across North West Durham over the last few months have mentioned when I’ve met them is the need for clarity about the future so that they’re able to take long-term decisions about the land they farm.”

“It’s quite clear that it’s a positive move overall to move towards a system that rewards farmers for the positive environmental impact that they make and shifts taxpayer resources to positive outcomes for our environment, rather than giving landowners money for simply owning land. It’s a hugely positive step and one that is broadly welcomed but getting the detail rights is so important.

“That’s why I was so pleased when Paul and other members of the RPA and Defra agreed to come up to Weardale and talk directly with me and local farmers about how the new payments scheme will work.

“Of course not all the details are there yet, but we’ve got to get this right to ensure we deliver good, local food production and first-rate environmental management.

“The men and women who work on the land who know it best and I want to make sure that our local farmers are listened to every step of the way.”