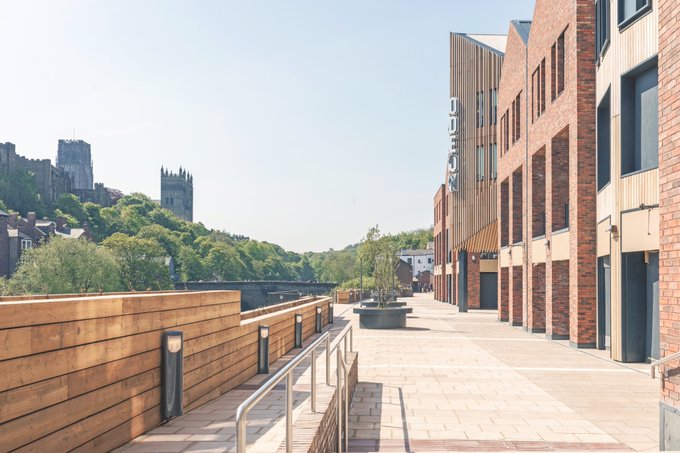 Since the announcement of its construction in 2016, the Riverwalk shopping centre has promised a local economic boost in the form of 120 new retail and service jobs on top of the 195 construction jobs it says it has provided during its construction, which is now almost entirely finished.

The £30,000,000 investment boasts an impressive range of restaurants, cafes and bars as well as a cinema and even student accommodation and is described by its website as an “enhanced shopping centre” that will  “improve access to the city centre by linking all retail and leisure offerings at the scheme and creating a synergy with the shopping streets around the World Heritage Site, the Market Square, and Freeman’s Quay.”

The walkway is open ????#Durham pic.twitter.com/M9ajq4pR1Y

However, the size of the development may leave some wondering whether Durham city centre is in need of it. One disgruntled resident of Gilesgate wrote to the Northern Echo in February observing  “The only shops which are there currently were there before the renovations started” and commenting “It appears that this site is now trying to rival Walkergate. No wonder no one comes into Durham anymore. Heaven knows what tourists think when they come to the city.”

Who’s behind the new development?

The owners of Riverwalk shopping centre, the privately owned property investment firm Clearbell capital, may cause alarm in Durham residents who savour more locally owned and independent venues.  The group has a portfolio of over 70 large scale property developments across the UK and claims to have managed £2 billion and raised a further £1.5 billion from over 55 investor groups in the business’s history. The shopping centre seems set to compete with various businesses of the same kind in the area, such as the Walkergate and Prince Bishops shopping centres as well as the already well-saturated market of retail and dining businesses in the city centre. Potentially the worst hit of all could be the council-owned Gala, whose cinema is threatened by Riverwalk’s six-screen Odeon, as well as its new restaurants and cafes which are located nearby on the other side of the river.

However, in a response to a Durham Magazine request for comment on the issue, the head of culture and sport at Durham County Council Stephen Howell took a decidedly upbeat tone with regards to Riverwalk, saying “We fully support the Riverwalk development.  It is vital we do as much as we can to attract new retailers to the city, as part of a wider ambition to encourage investment across County Durham. By providing an environment where both high street names and small artisan retailers can prosper, we will attract more people to our historic city, boosting the takings of new and existing businesses alike” adding that “As one of the county’s most popular cultural venues, the Gala Theatre is very much a part of this dynamic vision for Durham’s future.”