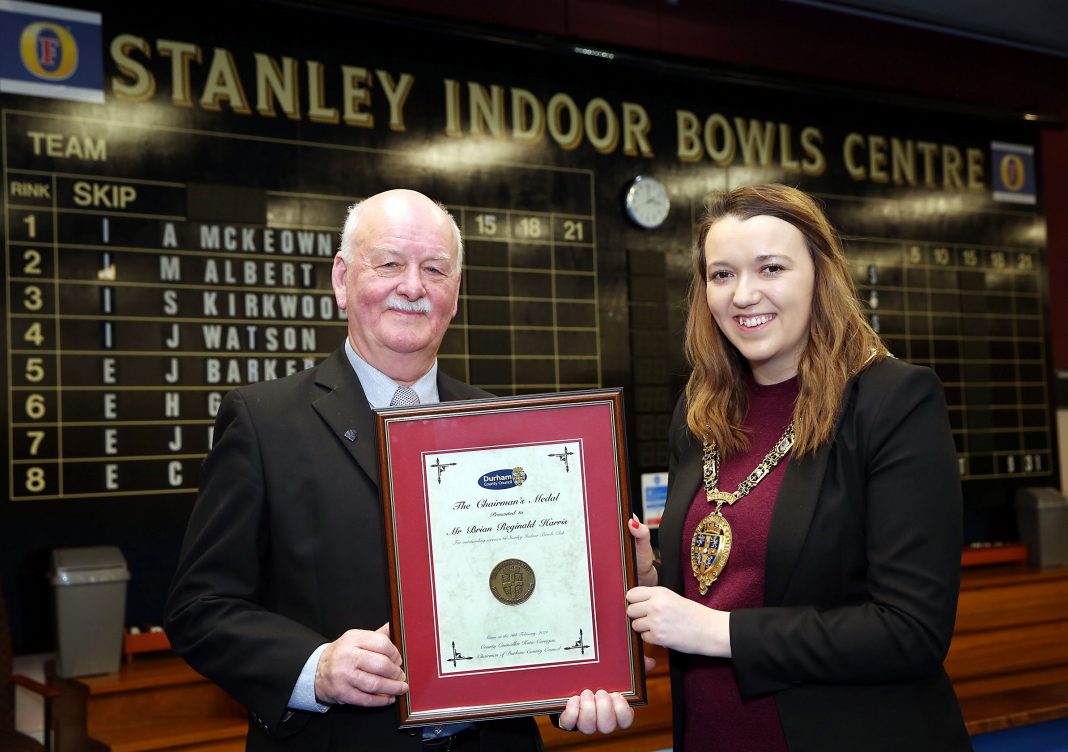 Brian Harris was awarded with The Chairman’s Medal, the highest honour that Durham County Council can award, for the years he has devoted to Stanley Indoor Bowls Club.

Brian has volunteered at the club since 1987 and became club president in 2006. He was instrumental in the asset transfer of the club’s base from the county council to a limited company in 2012.

He is a passionate advocate for the whole community, helping people of all ages, abilities and backgrounds to access the club’s facilities, developing plans to encourage young people and those with disabilities to enjoy the sport.

Under Brian’s leadership, the club has attracted international interest and has hosted several major competitions, including the British Isles Home International Series in 2011, 2013, 2014 and 2015, as well as the Co-op televised series in 2013, 2014 and 2015. Brian was instrumental in securing the Great Britain under 25’s tournament and received his Chairman’s medal at the competition’s closing ceremony.

Brian said: “I’m very proud to receive this award but the success of the club is not something I could have achieved by myself. I’d like to thank the many people who have supported me over the years for their help and guidance.”

As an active bowler, Brian is an inspiration to other players as he has won several national indoor championships from 1992 to 2014 and represented England in 2013. He has an equally impressive outdoor bowls record and has represented County Durham in over 100 consecutive games between 1982 and 2001.

Over the past few months, Brian has played a key role in securing £300,000 of funding for capital works to the bowls centre.

Presenting Brian with his medal, Cllr Corrigan announced: “There are several committee members and volunteers who contribute to the overall running of the bowls centre but Brian leads by example. Over the past 20 years, the club has become a valuable community asset which is thriving under Brian’s leadership and management.

“His outstanding commitment and hours of unpaid work have turned the centre into a community hub for Stanley and the prestigious events which he has negotiated and delivered have given the community a sense of pride.”

Brian’s local councillor, Cllr Carl Marshall, who nominated him to receive the Chairman’s medal, said: “Brian is an extraordinary role model. He is dedicated to providing and preserving this valuable asset for the local community and helping people to realise their full potential and compete at a regional and national level.”