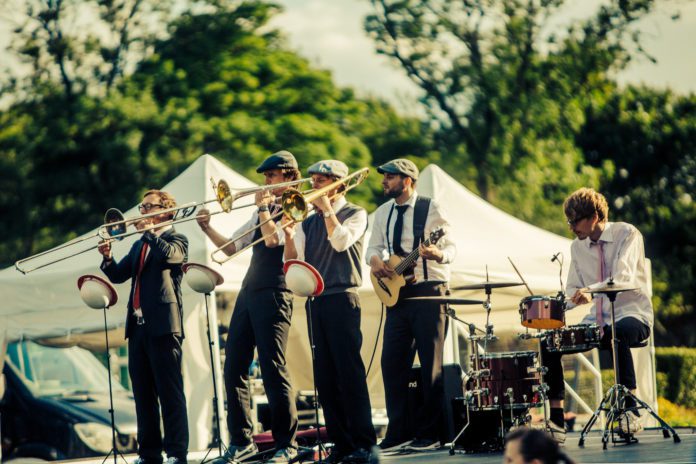 To misquote an old saying, ‘Where there’s muck there’s brass.’ That most English phenomenon the Brass, sometimes Silver, Band has a sound to stir the heart and soul with its silken tones and stirring tunes, enough to make the most unmusical person tap a toe to the music. Brass Bands have their roots deeply in those heavy industries, and the muck that went with them, so prevalent in the North.

The Fairey Brass Band is a hugely successful Champion Brass Band and they are to grace us with their fine musical presence for the Durham Brass Band Festival that will run from 11th July to 17th July.

The Fairey Brass Band, based in Stockport, Greater Manchester, was established in 1937 as the Fairey Aviation Works Band by personnel who worked in the aircraft building factory. The band is mixed and hosts some of the finest young brass banding talent in the entire country. They play a wide range of music from opera and hymns through to more modern works, and over the years have been led by such luminaries as the legendary Harry Mortimer. The present Musical Director is another great name from brass banding circles Mr Harry Cuff. Visitors to the concerts can be assured of a wonderful musical experience.

The 21st Century Brass Bands on the British scene draw the history and heritage from the 19th Century when working people throughout the country came together to form bands for their own self-expression and the betterment of their contemporary communities. Most were based largely throughout the North of England but with notable examples from elsewhere in the United Kingdom. Many Brass Bands were based around collieries, heavy industries, and manufacturing industries, plus the Cooperative Movement who still boasts a fine brass band in the CWS Band. Brass and Silver Bands are to this day comprised of wind instruments and percussion only.

It is heart-warming to know that many grand youngsters are joining bands and that the movement is flourishing right here in Durham City and County thanks to the Durham County Brass Band Association. Amateur musicians of all walks of life come together in their own time to make music and entertain and in the process bring out the true character of our splendid youngsters and those who are not so young.

Why not join in the fun and listen to the Bands, they will lift the spirits and send you home smiling and tapping a toe. Enjoy.