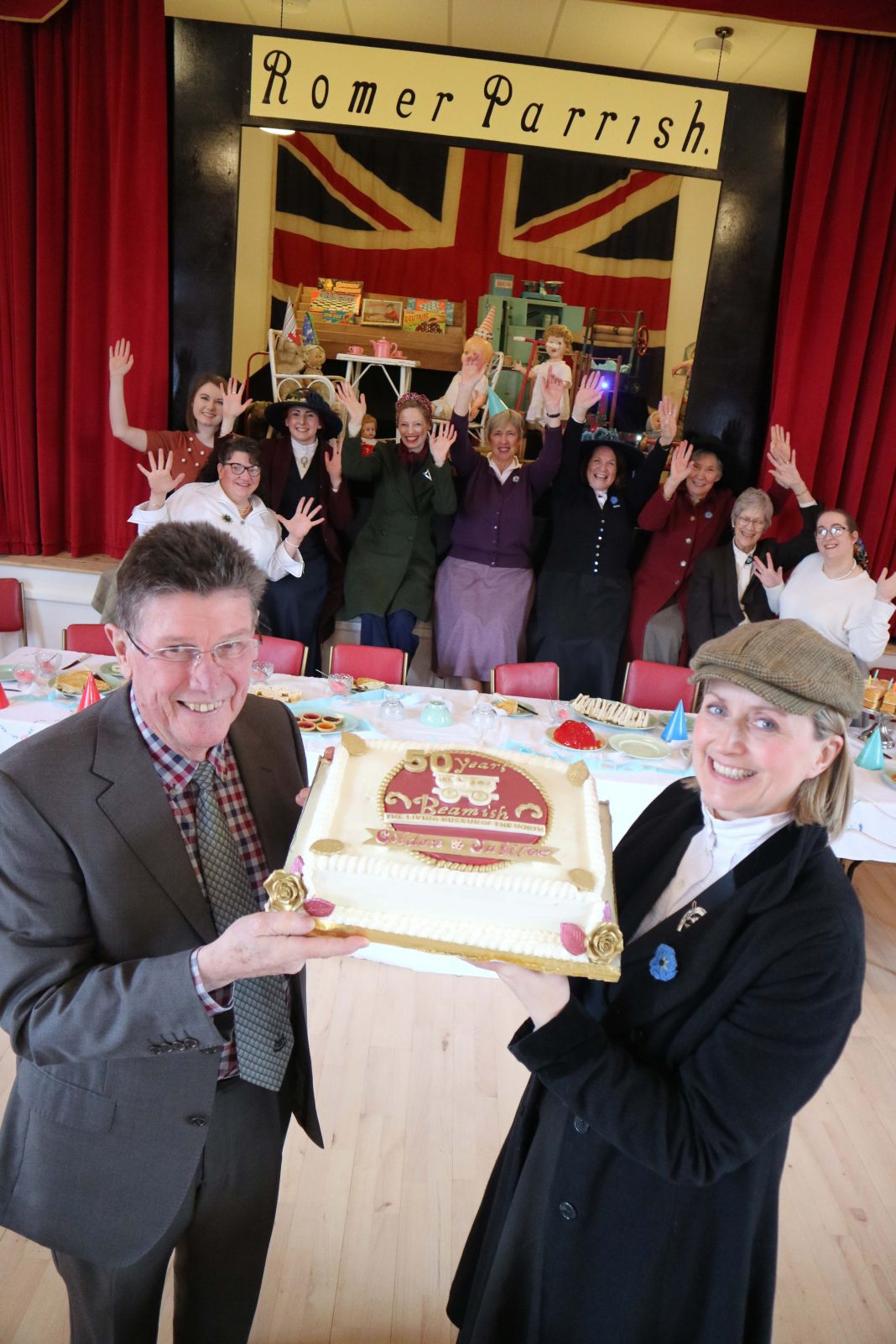 50 years is the time it takes for 1970 to become 2020 and Beamish Museum, The Living Museum of the North, definitely deserves a cake for being there for that. If we were in charge, they wouldn’t have to wait 50 years: we’d give them a cake anytime they liked.

But there’s more than cake happening to mark Beamish’s 50th anniversary, which kicks-off with a Happy Birthday Beamish! event during February Half Term, from 15th to 23rd February: come and join in Georgian, Edwardian, 1940s and 1950s celebrations, with parties, games, craft activities, cakes and other cakes.

Throughout 2020, there will be several celebratory events, exhibitions, competitions and special merchandise.

Rhiannon Hiles, Beamish’s Deputy Director, started as a volunteer at Beamish 25 years ago, aged 25, which means that she is also celebrating her 32nd birthday this year.

Rhiannon proclaimed: “We are so excited to be celebrating our 50th anniversary with all of our visitors, staff, volunteers and supporters and what a year we have in store!

“With record visitor numbers of over 800,000 last year, we are looking forward to a year to remember with activities and celebrations to mark our very special Golden Jubilee.

“Beamish is everyone’s museum and we are honoured to be part of the region’s heritage, it is the stories and memories of the people of the region that make Beamish what it is.

“I’ve worked at Beamish for 25 years this year and will be celebrating my own 50th birthday in style with the museum during our joint golden year.

“l am very proud to be part of the museum’s history and we are looking forward to hearing more stories and memories, so get in touch and let us know yours!”

Beamish was founded in 1970 by Frank Atkinson to preserve the region’s everyday ways of life for future generations to experience, including customs, traditions and dialect. Frank had observed dramatic change, with industries such as coal mining, shipbuilding and manufacturing disappearing, along with the communities that served them.

Cllr Ossie Johnson, Chair of Beamish Museum, related: “All of us involved with Beamish Museum are immensely proud of how much the museum’s activities and exhibitions have developed over the last 50 years.

“Beamish is truly a living museum belonging to our communities which has allowed us, over the last 50 years, to enhance our visitor experience and we will continue to do this in future years.

“I am looking forward to celebrating our achievements with the trustees, staff and visitors.”

Dr Linda Garbutt, Chair of the museum’s Access Panel, has been a volunteer for nearly 20 years.

She disclosed: “As a living museum, Beamish began with enthusiastic support from many people bringing their skills and knowledge to the enterprise.

“Beamish has grown and developed with many changes over the years, with the devotion, commitment and enthusiasm of all staff and volunteers remaining central and as strong as ever.

“This expertise of all kinds is what I observe at the heart of Beamish and, as it has contributed to this first 50 years, I feel that it will continue to do so into the future.

“As a volunteer, being part of the Access Advisory Panel, I have felt both privileged and valued as we were included in every stage of a development, from initial ideas, through planning and fundraising to the launch of the project. An early example of this process is that of the first accessible bus which presented the ongoing challenge of retaining authenticity and providing access.”

The museum’s £20million Remaking Beamish project is currently underway, the biggest development in its history, featuring a 1950s Town, 1950s Farm and expansion of The 1820s Landscape, including a Georgian inn where visitors can stay overnight.

Find out more about Beamish’s 50th birthday celebrations at www.beamish.org.uk.  Visitors can share their Beamish memories by emailing goldenjubilee@beamish.org.uk.