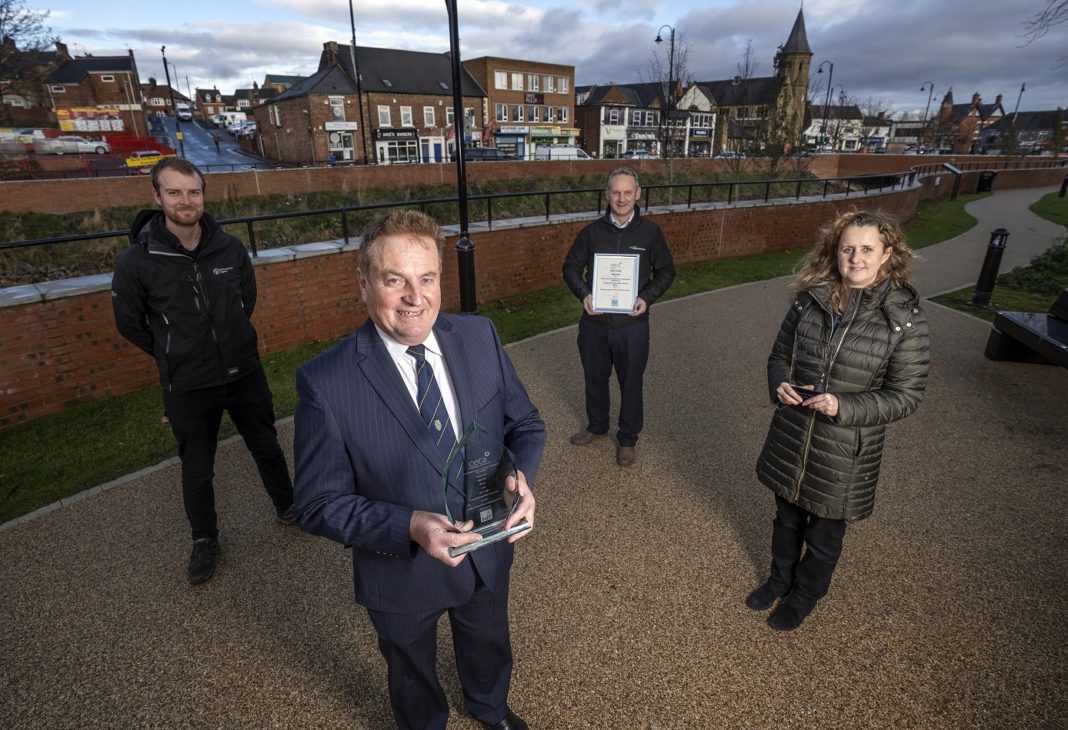 A scheme to prevent flooding in Chester-le-Street has won an award for protecting businesses and homes from water damage.

The flood prevention scheme, developed by Durham County Council and the Environment Agency, was up for the Going The Extra Mile award at this year’s Civil Engineering Contractors Association (CECA) North East awards.

With a long history of flooding, including more than 100 homes and businesses affected, the council and the Environment Agency developed the scheme to tackle the water levels of the Chester Burn.

Esh Construction was appointed to carry out the works, which involved opening up the 87 metre stretch of the Chester Burn that previously flowed under the town’s Market Place and constructing reinforced concrete flood walls to both ends of the river.

Riverbanks were also created to prevent erosion and the Market Place was laid with Yorkstone paving, underlit granite benches and plants to enhance the appearance of the square.

The CECA awards acknowledged the project for its success in better protecting the area from flood risk, with 72 homes and over 400 businesses now benefitting from the improvement works.

Judges also recognised that, despite the coronavirus pandemic, the scheme was completed within the target deadline and without going over budget. It is estimated that the works will create £21 million in economic benefits for the town over the next 50 years.

The scheme was also praised for its significant environmental benefits including restoring the river; improvements to habitat and diversity; retention, replacement, and planting of trees to act as a natural flood defence; and the creation of a wetland habitat capable of reducing pollution.

Outside of the work programme, Esh Construction was commended for its provision of educational and community initiatives in the town, including student participation in work experience, workshops and site visits, as well as the provision of Science, Technology, Engineering and Mathematics (STEM) kits to Key Stage 1 students and charitable donations to local groups.

“It is fantastic that this project has been recognised for the difference it has made to businesses and communities in Chester-le-Street.”

“This collaborative and innovative approach has allowed us to work with partners to achieve the best outcome possible for this scheme, protecting hundreds of homes and businesses from flooding as well as creating economic, environmental and community benefits.”

Simon Wilson, team leader for the Environment Agency’s Flood Risk Management team, said: “We work closely with our partners to develop flood schemes which provide the best flood risk benefits to the community as well as bringing a boost for the environment and improving community amenity.

“We’re really pleased the Chester-le-Street scheme has been recognised for achieving all of this and proud to have helped bring it to fruition for the town.”

Steve Conn, divisional director at Esh Construction, said: “For this project to have been recognised now in two prestigious awards events is a fantastic achievement for everyone involved. At Esh, we are passionate about supporting our communities and throughout this scheme we delivered a wealth of social value initiatives within the community, as well as supporting local businesses by reinvesting more than three quarters of the total scheme procurement cost locally.

“Esh Construction was founded in County Durham, and Chester-le-Street Flood Alleviation Scheme is a project we are very proud to have delivered.”

For more information about the scheme, visit www.durham.gov.uk/chesterburn