Home Lifestyle Raby Branching out with Adventure Playground in The Forest 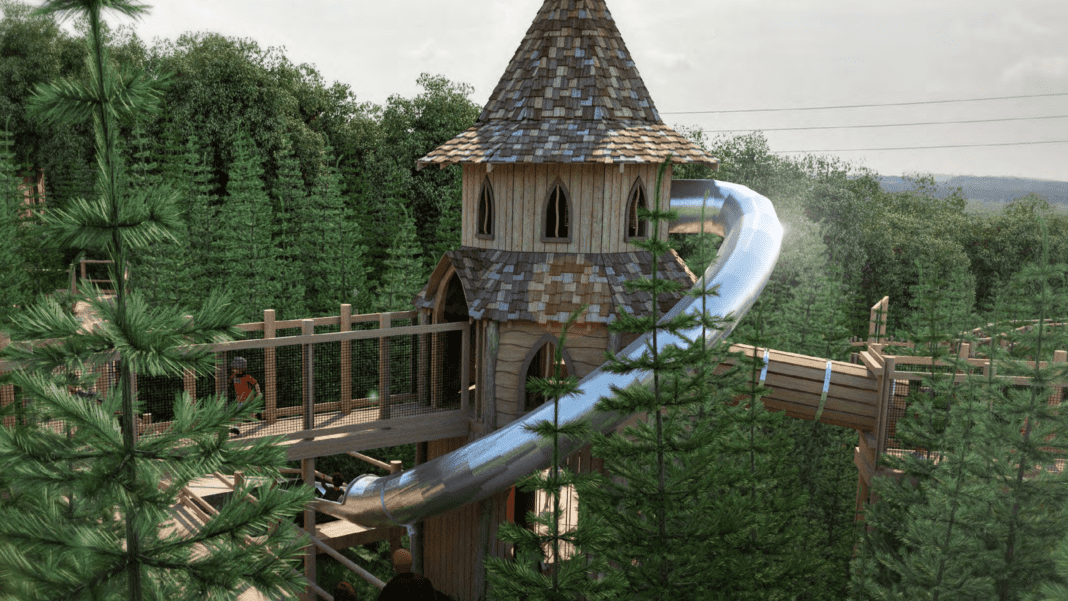 The project is part of a wider development, known as The Rising, that promises to attract new visitors to the area and create outstanding recreation for the local community.

The bespoke and inclusive playground features a fully accessible boardwalk through Raby’s Christmas Tree Plantation, opening a previously inaccessible part of the grounds, as well as three-storey play towers, high-level walkways, tunnels and climbing walls, along with several ground-level play trails and slides.

The new attraction also has a purpose-built area for toddlers, with mini turrets and lookout decks – conveniently located next to the new split-level café.

Construction of the playground has also been carefully managed to cause minimal disruption to the natural surroundings of the Christmas Tree plantation, to preserve habitats and ensure ancient trees are un-damaged during the build.

The Rising’s project director Claire Jones said, “This carefully considered, new addition to Raby Castle, has been inspired by the historical architectural elements within the castle such as The Neville Gateway, but also the many stories associated with the estate, particularly the Rising of The North.”

Nestled in a stunning woodland within the grounds of Raby Castle, this new adventure play area will be an exciting mix of challenge, discovery, and intrigue for all its visitors, both the young and the young at heart.

The design also ensures that visitors can sample the stunning views of the castle and grounds from the turrets and towers, while adventurers of all ages wind their way through the wonderful world of woodland play at Raby.

Work started on the playground at the end of last year and the ground was broken by two young local heroes, eight-year-old Ryan Chidzey from Gainford CE Primary and Preschool and eight-year-old Charlotte Hawke from the Federation of Abbey Schools in Darlington, – who won a competition to attend the ceremony with Lord & Lady Barnard and invited dignitaries.

The wider scheme at Raby Castle, known as The Rising, will include the significant restoration and renovation of several historical buildings on the estate, the creation of a new café and events space as well as a new visitor hub and landscaped areas. Work on the two-year construction programme started with the new 300-space car park to service the new attractions.

Raby Estate owners, Lord and Lady Barnard, have announced a suite of key consultant hires to bring The Rising to fruition, alongside the creation of over 40 new jobs at Raby Castle itself.

Lord Barnard said: “We have now entered the construction phase of this ambitious project, which will deliver wonderful spaces for families to enjoy and to further establish Raby Castle as a must-see visitor destination. This new playground will provide a truly magical space for children and families to enjoy.

“We have spent the last four years planning the development, which promises to put Raby Castle on the map for visitors to the area, as well as providing a beautiful place for the local community to enjoy, all year round.”

The new adventure playground’s build schedule is expected to last a further four months and plans to open at Easter 2022.