Graffiti discovered in a maze of First World War tunnels has led to a quest by a team of archivists, archaeologists and historians to find out more about the Durham soldiers who scrawled it. Written by members of the Durham Light Infantry (DLI), the graffiti gives the names, service numbers and regiments of three men who fought in the little known chapter of the First World War that was waged underground.

Members of the Teesdale and Weardale Search and Mountain Rescue Team (TWSMRT) had been helping to explore long forgotten passageways dug during the Battle of Loos (France, September-October 1915). And in waterlogged tunnels filled with rusty explosives, digging equipment and various remnants of trench life, they were surprised to stumble upon the simple pen-and-pencil inscriptions that bore a strange connection to their home region.

TWSMRT member Paul Alison said, “The sector of the line called Copse – which is part of a 12-kilometre-long front near Lens – has a multi-level network of tunnels, including listening and fighting galleries, a brigade battle headquarters, and several internal and external shafts.”

“The tunnels are difficult to explore as there can be poor quality air, deep water, unstable collapses and unexploded ordinance.”

“I seem to have an aptitude for digging through collapsed and filled sections of tunnel. With bomb disposal experts, I create safe access so historians and archaeologists can enter a world not seen since 1918.”

“The DLI probably weren’t involved in the tunnelling, but may have been living and working down there.”

“We often find graffiti, but it is rare to find any that is identifiable to an individual and, because it was the DLI, I took an interest and approached the Durham Record Office for help to find out more.”

Gabriel Damaszk, an archivist at Durham County Record Office – and also a TWSMRT member – was given the names and service numbers of the three men. Along with volunteers from the Durham at War project, Mr Damaszk carried out research to find out more.

He said, “We were given three images of graffiti on tunnel walls and as the Record Office holds the archives for the DLI collection, we set out to discover what we could about these men and their families, which would possibly lead to finding living relatives.”

“All three were discharged due to being medically unfit for further service and that alone tells us something of the appalling conditions the soldiers had to serve in.”

“Making sure we were following the right people was very tricky and the fact the soldiers’ names were very common made our task even harder.”

“By sharing the results of our research, we hope that there are members of the public who know more and will come forward to help us complete these soldiers’ stories.

Robert Richard Slater (20/857) was born in Ryhope, now Gateshead, in 1892, son of Robert and Dorothy. His father was a miner, but later became a bootmaker in Thornley Colliery, near Kelloe. Richard helped with his father’s business before he enlisted in 20 DLI. He later transferred to 14 DLI.

Both these battalions were mainly engaged in digging and maintaining trenches. Discharged in April 1919, Robert was awarded the British Medal and the Victory Medal. Robert married Hilda Ruddock in 1918, and they probably had a son, also called Robert Richard.

Reginald George Walker (27955) enlisted in Consett on 10th November 1915, aged 19. He joined 18 DLI, but soon transferred to 2 DLI. He was sent on a signalling course, but did not serve long as he suffered from acute appendicitis and spent time in hospitals in France and England. He was discharged in April 1919 and awarded the Silver Badge.

Reginald later married and had a daughter before emigrating to Australia. He appears to have travelled alone and it is unclear whether his family joined him there later.

J. Brown(e) (9533) served in 2 DLI. He enlisted in September 1914 and was discharged in March 1919. Little is known about this soldier except for the fact he was awarded the Silver War Badge, the Victory Medal, the British War Medal and the 1914 Star.

More details can be found at http://www.durham.gov.uk/article/10652/Appeal-for-help-to-find-First-World-War-graffiti-soldiers. Members of the public who have any more information about these soldiers are urged to contact Durham County Record Office by calling 03000 267 619 or emailing record.office@durham.gov.uk. 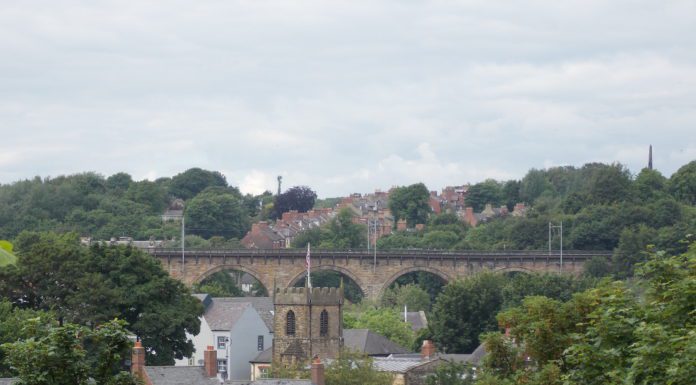 Refrigerators, Battlefields and Lots of Universities – What Do You Know about Durham’s Twin Towns?