A ninety-year old ex-Durham Miner has seen a lifelong dream come true. Grandfather George Simpson, from Coxhoe, near Durham, went up in a light aircraft as a ninetieth birthday treat. Mr Simpson’s son, Peter, organised the trip as a surprise, springing it on his dad during his birthday party on Sunday, 17th July, which George was celebrating with his three children and grandchildren. The father and son set off from Durham Tees Valley Airport and flew all over the North-East. And, for a spell, the nonagenarian Mr Simpson was in charge of the controls.

Mr Simpson said, “I’m not used to it, but when we got up it was lovely. It was a beautiful day. It was just like driving a car. It was one in a million.”

After setting off from the airport, they headed north and flew over Mr Simpson’s home in Coxhoe. They then flew over Durham City before swooping over Millburngate, where Mr Simpson was born.

“It was a nice day and I enjoyed it. I’ll not forget it,” Mr Simpson stated.

In an additional treat for the grandfather, the plane flew over the Stadium of Light. Mr Simpson is a committed Sunderland fan.

“All the houses were so little,” he said. “Even the stadium looks little at that height.”

Mr Simpson had never been abroad or on a plane before. His son Peter said, “He was always asking me what it is like in a plane. He’s always had a desire to go up, but never done it so I organised it for his birthday. It was a lovely day. He absolutely loved it.”

The flight was arranged by Durham Tees Flight Trainings, who are based at Durham Tees Valley Airport.

Mr Simpson’s wife Eva, however, decided not to join her husband in his first flight. She has also never ventured onto a plane. She said, “I’ve never fancied going on a plane. For our grandchildren going on a plane is nothing because it’s just like going on a bus.”

Mr Simpson mined coal at Bowburn and Fishburn collieries before finding a job manufacturing cookers in Spennymore. Commenting on his birthday treat, he said, “I’ve always talked about it, but I’ve never been up. If I get the chance, I’ll go up again.” 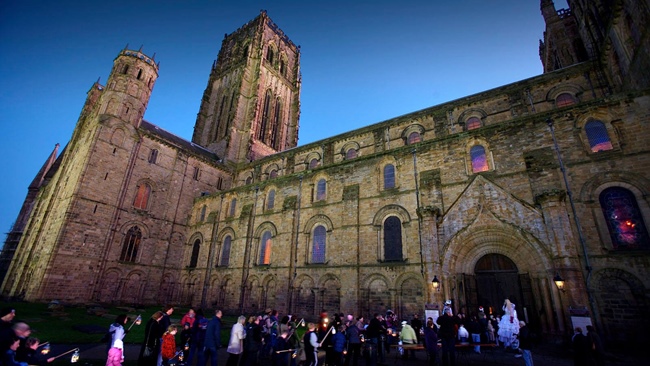 Who Was St George and Why is he England’s Patron Saint?