A brand new production of Alan Bennett’s Talking Heads, a drama inspired by the detective tales of Agatha Christie, and kids’ shows featuring whacky inventions and incredible monsters are just some of the highlights of the 2018 Spring Programme of Durham’s Gala Theatre.

Drama at the Gala 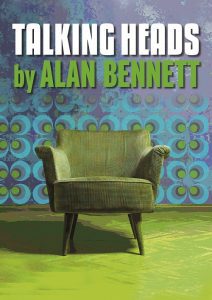 The Gala’s production of Talking Heads will bring to life the Bennett stories Bed Among the Lentils, A Chip in the Sugar and Soldiering On.

Talking Heads will be on at the Gala from Tuesday 6th to Saturday 10th March. There will be a 2 for 1 offer for the opening night and all tickets for matinees are priced at just £12. Tickets for the performance of Wednesday 7th March can also be bought for £12 if purchased before New Year.

Crimes Under The Sun – a drama inspired by the works of Agatha Christie and The 39 Steps – concerns a hilarious yet murderous trip to the English Riviera. Crimes Under The Sun will be staged on Wednesday 25th April. Tickets cost just £10 if booked before 31st January.

The Gala’s Spring Programme also includes a number of children’s shows. Bear and Butterfly is an enchanting story of love, loss and friendship aimed at children between four and seven. There will be two performances, both on Wednesday 24th January, with family tickets priced at £22.

Monstersaurus! – in which young inventor Monty creates whacky inventions and crazy monsters – is suitable for children aged three and above. Monstersaurus! will be staged at the Gala on Sunday 4th February.

Two fabulous family shows will be coming to the Gala, thanks to theatre company Kitchen Zoo. The Owl and the Pussycat will be staged on Tuesday 27th March and The Tinfoil Astronaut will visit the Gala on Sunday 15th April.

Comedy at the Gala

Durham’s Gala Theatre will be hosting some of the nation’s most popular comedians this spring. Unfortunately, shows featuring Sarah Millican, Ed Gamble and Joe Lycett have already sold out.

At the time of writing, tickets are still available for Dave Spikey – who will bring his 30th anniversary tour to Durham on Thursday 25th January – and for Lefty Scum, a show featuring Josie Long, Johnny and the Baptists, and protest musician Grace Petrie. Lefty Scum can be seen at the Gala on Sunday 25th February.

John Robins will be bringing his angsty show – voted Best Comedy Show at this year’s Edinburgh Fringe – to the Gala on 30th March while Jeremy Hardy will be performing on Thursday 26th April.

On Monday 22nd January, a number of folk musicians – including The Young ’uns, Faustus, Nancy Kerr, and members of Bellowhead – will be getting together for a retelling of Peter Bellamy’s legendary folk opera The Transports (about convicts being transported to Australia).

Other musicians who will be gracing the Gala stage include singer-songwriter John Smith on Sunday 4th February, the award-winning jazz-inspired Clare Teal and trio on Friday 13th April, and folk singer Cara Dillon on Thursday 19th April.

Dr Lucy Worsley will be visiting the Durham Gala to talk about her new book on Jane Austin on 19th March while writer and broadcaster Stewart Maconie will be sharing his experiences of retracing the 1936 Jarrow Crusade on Saturday 10th February.

The three-day Durham Adventure Festival – which celebrates adventure, wilderness, exploration and endurance – will take place at the Gala from Friday 27th to Sunday 29th April. The festival will include film screenings, fascinating talks and free basecamp sessions.

To purchase tickets or learn more about the Gala Theatre’s Spring Programme, please go to  www.galadurham.co.uk